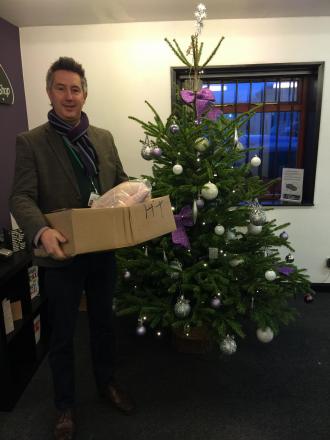 THE winner of One Stop Car Shop’s Christmas prize draw has donated the gift to Atherton and Leigh’s foodbank.

The car supermarket company, which is based in Astley, drew the winner on Tuesday.

A hamper of meats, from Meat Mart in Chaddock Lane, Astley- worth £89- was the lucky gift and it seemed as though fate worked its magic as the winner was none other than manager of Atherton and Leigh’s Foodbank, Warren Done.

James Higham, of One Stop Car Shop said: “It seems only fitting that the winner was a man whom himself helps feed the hungry.

“Warren dedicates his time to helping others and is heavily involved in the Atherton and Leigh foodbank that provides so much help to the local community in these difficult times.

“There couldn’t have been a more worthy winner and yet in his true spirit he has agreed to donate the prize to members of the foodbank who need it more than him.

“The One Stop Team are so happy with this decision and knowing that their Christmas Prize has gone to help feeding the hungry.”

The car company has regular monthly prize draws on Facebook and anyone who ‘likes’ the page and shares the prize draw post is in with a chance of winning.

Warren Done said: “It feels great to have won as I have never won anything in my life.

“It’s a great honour and I’m donating it to the foodbank where I know some people will appreciate it.”

The foodbank, which has been open since March 2012, helps more than 100 people a week, with the winter months seeing an increase in its demand.

The service is run by volunteers and relies on community help and donations.

Warren added: “We need everything really from van drivers, packers, meeters and greeters.

“The support from local businesses is much appreciated and welcomed as well.”

To support the foodbank go to: http://athertonleigh.foodbank.org.uk or contact Warren Done on 07980881925